Celleron’s preclinical pipeline consists of a series of target enzymes involved in control of epigenesis with key roles in cancer biology. They have been selected using a systems biology approach to increase the likelihood of biochemical synergy when these enter the clinic. Our experience tells us that anticancer drugs are most unlikely to be curative on their own, hence the need to develop rational combination cancer therapy, one of Celleron’s particular strengths.

Celleron’s proprietary drug, CXD101, is a dual mechanism HDAC inhibitor with multiple properties that differentiate it from competing compounds. CXD101 is a novel epigenetic immune-regulator which has the ability to enhance immune recognition of tumour cells. This is particularly important as CXD101 has great potential as a partner in combination with established immune-oncology agents to increase the likelihood of the tumour’s immune recognition and destruction. Its mode of action and chemistry are well characterised and show a slow on/off mechanism and unique chemistry. In preclinical studies CXD101 is active as monotherapy in lung and colon xenograft models. The effect on cell proliferation in tumour cell line models both for Non-Hodgkin’s Lymphoma and for multiple myeloma have been studied. CXD101 has shown clinically important tumour remissions in the Phase I trial.

CXD201 is a proprietary topoisomerase inhibitor with multiple points of difference from competing products. CXD201 is derived from the homocamptothecin family, exhibiting a unique chemical composition and improved pharmacological properties.

CXD201 is active in an impressive range of xenograft tumour progression models. CXD201 has already entered a series of Phase I studies, showing clinical activity with a very tolerable side effect profile. CXD201 is orally administered and ready for entry into Phase II clinical trials.

The antibody may be used to treat diseases associated with aberrant CSF-1 signalling, such as tenosynovial giant cell tumour (TGCT), also known as pigmented villonodular synovitis, in which joint (usually knee) synovial and tendon cells pathologically over-produce CSF-1. This drives a destructive proliferation of synovial mononuclear cells, mixed with multi-nucleated giant cells, foam cells, siderophages, and other inflammatory cells.  TGCT is a rare disease, with a prevalence of 44.3 per 100,000 persons for Local-TGCT and 11.5 for Diffuse-TGCT.

While TGCT is not in itself a metastatic life-threatening disease, it results in important functional impairments, significant joint damage, and decline in quality of life; which finds a high healthcare demand, and loss of work productivity. 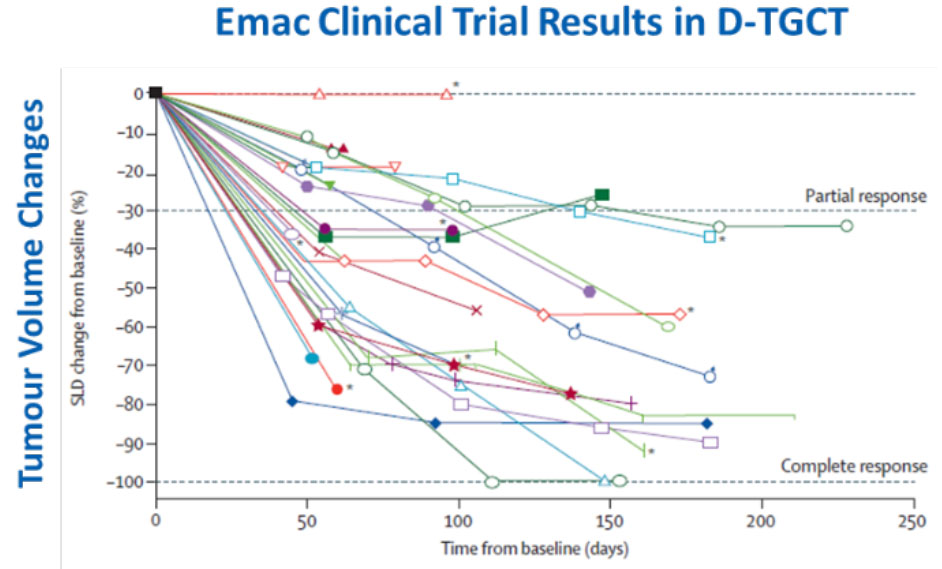 Celleron Therapeutics have licensed emactuzumab from Roche, and will develop it commercially as a novel medicine for inoperable TGCT. In 2015, Cassier et al* reported a Phase I clinical trial in which 29 TGCT subjects received ascending doses of emactuzumab (900mg, n=3: 1000mg, n=17, 1350mg, n=5; or 2000mg, n=4) iv every two weeks. 24 of 28 evaluable patients achieved a tumour size objective response, with 2 complete responses and 22 partial responses according to RECIST 1.1 criteria (ORR: 86%). 27 of 28 patients showed tumour shrinkage, with 1 showing stable disease (DCR: 100%).  Tissue biopsies taken at 4 weeks indicated that CD68/CD163 and CSF1-R macrophage were 100% depleted at the 1000mg dose.

Most frequent AEs were pruritus, asthenia, and various types of edema.  There were no deaths or cases of serious hepatotoxicity.  Grade 3-4 ADRs were pruritus, fatigue, lupus, and periorbital edema. 4/5 of these were in the 1350 mg and 2000 mg dose groups, evolving from 6 cycles onwards. 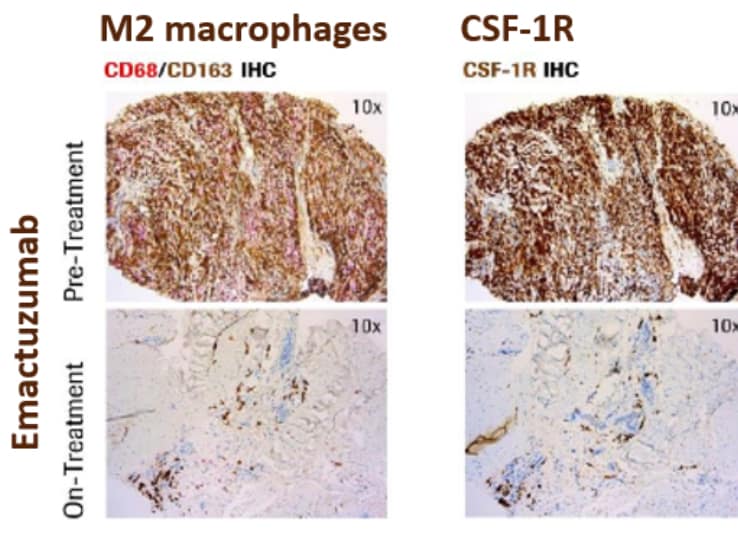